They are the San Francisco Giants.. World Series Champions for the second time in three seasons of Baseball. Reveled as the underdog or the come back kids.. What they truly are is a amazing team that has a heart of Gold. A team that knows that each and every person plays a vital role in their success. A team that doesn’t have one strong ego driven soul amongst them. I celebrated along side them today just as I did two seasons ago.

I stood in back and watched as everyone else did. The difference in me this time after 20 months of team building was I picked up more on the pride you could see they had in their team. That pride wasn’t about their individual success or just about where their success could be taking them by themselves. It was about their team and their fans. That’s exactly what’s so important to me.. I may not be the first to get there. But when I do my team will be with me.. I know I am building for the long term, not for the right nowツ 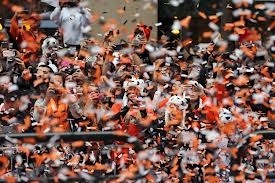 I took my kids today and I know they will be able to tell their kids that two times in three seasons they celebrated with the S.F. Giants.. Life is about creating memories that will never be forgotten while your time is here on this earth. If you are going to do it.. Do it with ethics, moral values and do it with your team in mind. You can’t go wrong ツ